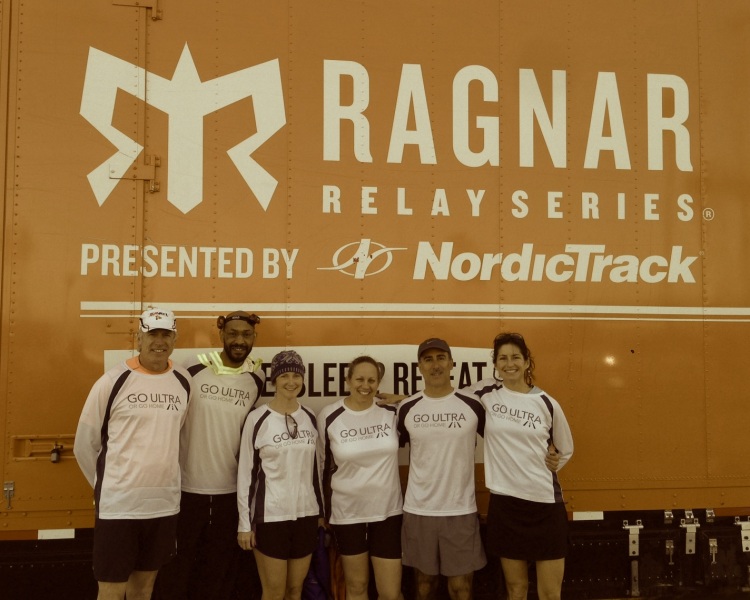 At the recent Ragnar SoCal, the largest of the 12+ Ragnar Relays, the majority of the 640+ teams ran in a community, a gaggle, a party, an exceptionally small graduating class of 12 runners.  They are, in deed, runners, committed to run, drive, sleep and repeat as many as three jaunts and anywhere from 12 to 19 miles of total road.

When you’re in your 20s or 30s, it’s a great way to spend a weekend.  If you have an active family, it’s an ambitious way to package a family vacation.  Eager to pull an all-nighter with a bunch of college frends, what a blast.  Unfortunately, Ragnar was a baby when I was vacating my 30s so the concept of overnight relays on the mainstream circuit was non-existent.

Buried somewhere beneath the animal house-like party is a smaller community of non-descript runners.  They stand out because they don’t stand out.  They left their leftover Halloween gear of yesteryear … tutus, sparkle, face paint, multi-colored wigs and super hero capes in the attic.  They’re dressed simply in functional running gear, standing tall on a foundation of scarred sneakers that have traveled thousands of miles.  They’re dressed like runners because they came to run.

At Ragnar, Epic and many of the overnight relays, little attention is given to this group of ultras, runners who are willing to run in small packs of six or fewer and as a result, assume the sometimes daunting responsibility of greater distances.  A six-mile distance can easily translate to 12 miles for the ultra runner who picks up two legs for every individual leg of a Ragnar Relay runner.  In a single instance, that doesn’t seem like much, but do the math and before you know it, you’re on the hook for 25, 35 or even 40+ miles in 24 hours.

Race organizers are sincere in calling out ultra runners with a green running number vs the standard orange.  We appreciate this subtle distinction, not because we want to start some type of running class warfare but to acknowledge the training, the commitment and the distress that can cut a team down in temperatures of 87 degrees or heat indexes 100 degrees +.  For the ultra team, there’s no bullpen or “can I phone a friend.”  It’s just the six of you.

So going by the name, “Go Ultra or Go Home,” we acknowledge all who run relays, Ragnar and others because stepping out onto the black top to run regardless of the distance is noteworthy, inspiring and increasingly important in our obese, poorly conditioned society.  Going Ultra … well that’s something that should be aspirational … stuff of bucket lists.

Hopefully one day, it will be elevated in the minds of relay organizers as something not for the few, but the many.  It should be clearly distinguished so participants take a shot at reaching the next level, regardless of whether they make it or not the first time.  The quest and the people who join you along that ultra experience make it a permanent impression.

A Finishing Quote from Steve Prefontaine

So I’ll close this post out with some great words from Steve Prefontaine, a runner of ultra spirit in most literal way.

“You have to wonder at times what you’re doing out there. Over the years, I’ve given myself a thousand reasons to keep running, but it always comes back to where it started. It comes down to self-satisfaction and a sense of achievement.”

A Penn State Wrestler turned avid short and long-distance runner, Dean enjoys competitive 5K and 10K races on the weekends, long-distance ultra relays and the occasional off trail adventure in far away places. His discovery of Ragnar Relays has been a catalyst for launching this blog, 40,000 Miles on Foot. If you find yourself in Atlanta, give a shout and maybe will hit the road.
View all posts by RunnerX »
« 24 Hours … SoCal Ragnar
Torrance Tornado … In Person »