Birthdays … The Routine of Life

On the eve of another birthday, it seems appropriate to talk about routine.  Afterall, there’s nothing more routine than a birthday, consistently appearing on the same day, year after year.  Even after you’re gone, others will routinely remember your day … a Facebook post, a gravesite visit, candle lighting at church, a call to a family member.  It is the quintessential routine.

Many of us see routine as an ugly word though, a characterization of all the things in life that make life rather mundane.  Waking up the same time every day to get to work or these days, to a desk with a Zoom screen.  Stopping at that “go to” breakfast destination for most likely, a quick, sugar fix and a mass-produced cup of coffee. Coffee, we routinely drink it multiple times a day.  For some, we try to routinely limit our consumption to two or three cups.  In the evening, after dinner or as part of a 21st century routine, we may dine in front of the TV, routinely binge watching series after series.  Some could argue about their willpower to break routine, demonstrating that they successfully transitioned from weekday programming to binge watching.  Congrats.

In light of COVID-19, some will argue that they stopped going to their favorite fast food destination.  Based on the stock performance of plant-based brands like Beyond Meat, some may even say they have changed up their diet routine of cow and pig.

Forced by life’s circumstances or not, there is such a thing as good routine.  In fact, I would argue that while routine won’t save your life, it most certainly will extend it.  10 years ago I changed my diet routine.  No more meat because I read, listened and experienced that the body was not meant to work so hard, so often, to break down animal protein.  Read the China Study for some insight.

Eight years ago, I took up ultra running, a routine that requires one to run more than 26 marathon miles in a single event.  That routine started with ultra relays, running somewhere north of 35 miles in 28 hours, with five others who would combine to log 200+ miles going from one city to another.  For five years, I ran them routinely until I needed another routine, the 24-hour race.  For three years, I have been trying to reach 100 miles.  It has become routine for me to fall short – 75 miles, 76 miles, 81 miles, 76 miles.  Failures to some extent, but along the way, the routine has placed my blood pressure, resting heart rate and VO2 Max at a youthful range.  As David Asprey writes in “Super Human, The Bulletproof Plan to Age Backward and Maybe Even Live Forever,” there are routines we can embrace to alter our destiny.

So I’m not writing to say there’s a way to live forever.  And I’m certainly not here to convince you of anything, to get political and encourage you to break the routine of idol worship, to put aside anger, to begin a routine of mask wearing, to find the lost meaning of being neighborly, or even convince you to turn off the tv and start binge running. 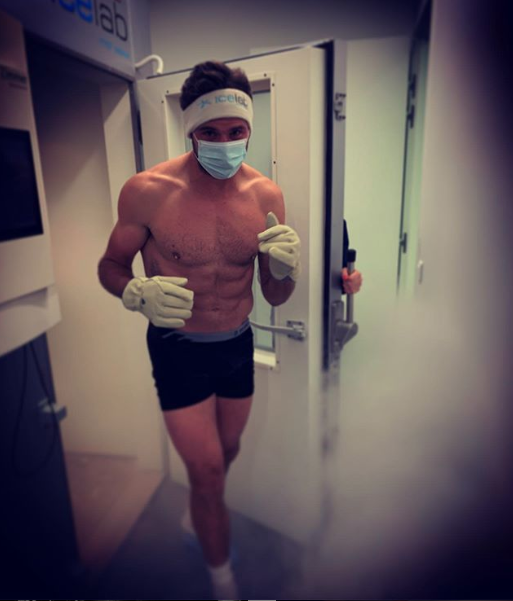 Writing this was simply a way for me to try something different this birthday or maybe start a new routine of sharing insights on this day.  And while I had hoped to reach a new milestone on my 56th routine birthday by running 56 miles this week, a routine hamstring pull delays that effort, but not the quest to run 100 miles in 24 hours this October.  I may, if routine will serve me, stop at 99 instead and then think about what’s next.  Maybe surfing every morning in the Blue Zone of Costa Rica.  Well, time to go.  I just started a cryotherapy routine.  My -240 degrees awaits.  Happy birthday to me!

A Penn State Wrestler turned avid short and long-distance runner, Dean enjoys competitive 5K and 10K races on the weekends, long-distance ultra relays and the occasional off trail adventure in far away places. His discovery of Ragnar Relays has been a catalyst for launching this blog, 40,000 Miles on Foot. If you find yourself in Atlanta, give a shout and maybe will hit the road.
View all posts by RunnerX »
« A Post From The Future